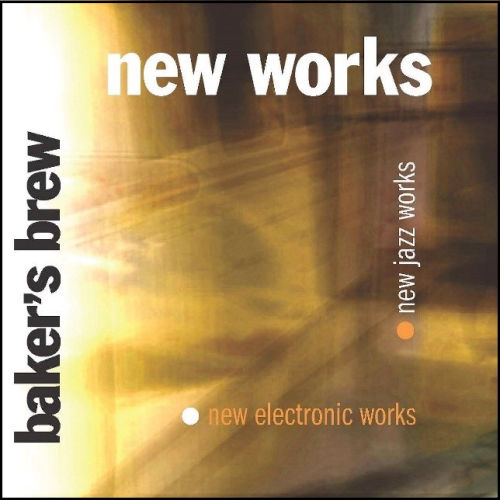 New Works is the very ambitious double CD follow-up to the first Baker's Brew record, New Colors .  The first CD of this new record features the group creating spontaneous jazz compositions as they had done with the first record, but the second CD puts the group into very new territory by performing in conjunction with surround sound electronic compositions.

Live performances with these 4 channel electronic scores have been a very striking experience for audiences, and the group has used the best mixing techniques available to them to simulate that experience with this record. Playing this CD on a large sound system is recommended as the best way to put the listener inside the sound field created by these works.

the group
Baker's Brew is a Los Angeles based experimental jazz group that comes out of the vast experience of veteran drummer Maury Baker. The group represents his long-standing ambition to combine all of his diverse experiences through total improvisation to create compositions on the spot. Baker’s Brew also includes guitarist Daniel Coffeng, Jim Goetsch on soprano sax and electronics, and Carl Royce on upright bass & electronics. The group utilizes surround sound electronic scores as part of their performances to give their audiences a truly unique experience. More info on the group at bakersbrewband.net

the release
CD 1 – new jazz works / The first CD in the release features spontaneous jazz compositions from the group. While the group’s work ranges anywhere from ambient jazz to avant garde, this particular collection emphasizes a spacious sound in the tradition of Miles Davis’ “Kind Of Blue” and the ECM label.
CD 2 – new electronic works / The second CD features the group improvising in conjunction with surround sound electronic scores created by group member Jim Goetsch. These works can best be appreciated on a large sound system in order for the listener to be inside the large sound field.

the leader
After extensive conservatory training, Maury Baker launched his career as a founding member of Ars Nova, a classical-rock group with a self-titled release on Elektra Records. After that, the next step was Janis Joplin’s band, performing with her at Woodstock and other major festivals as well as recording her classic album “I Got Dem Ol’ Kozmic Blues Again, Mama!”. This was followed by touring with Tim Buckley and recording his legendary "Starsailor" album.
A remarkable event on the Buckley tour was Maury’s appearance with the headliner Frank Zappa when his drummer couldn’t make the concert. Maury performed without a rehearsal, sight reading Zappa's complex scores and contributing to an entirely improvised 24 minute piece that has recently been released on 'Little Dots', an album from the Zappa Records label that includes other pieces from Zappa’s Petit Wazoo Orchestra.
In his career, Maury has performed, toured or recorded with Jimi Hendrix, Carlos Santana, Ron Carter, Johnny and Edgar Winter, Jackson Browne, Van Morrison, Seals & Croft, Judy Collins, Phil Ochs, Booker T. Jones, Zoot Money, Scott LaFaro, David Amram, Henry Franklin, Otmaro Ruiz, Austin Peralta and Zane Musa among many others. He is currently well known as a timpanist for baroque orchestras on the west coast.

PREVIEW TRACKS FROM THE RECORD:

sound samples, downloads, and CDs
will available at Amazon and Bandcamp