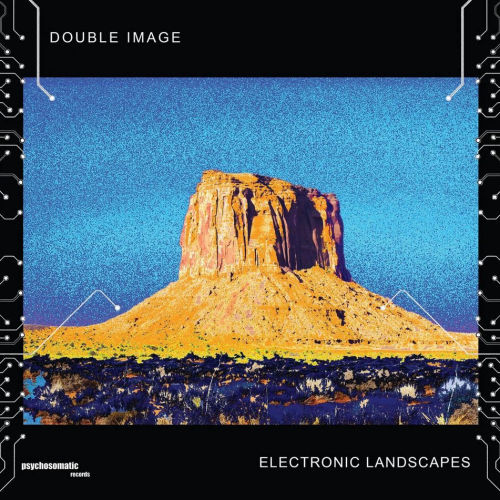 The Double Image project began as soundscape experiments by Jim Goetsch using synthesizer sequences for rhythm rather than drums to create a more low key sound, an idea that grew out of revisiting early Tangerine Dream records as well as some of the more atmospheric works of Jon Hassell and Brian Eno.

Jim became convinced something new could be done with those concepts, so he dug deeper into these experiments until an entire album was created. He named the project Double Image as his electronic alter ego to his experimental jazz persona with his other current project, Baker's Brew.

The Electronic Landscapes title came from the fact the record was done just with synthesizers and electronically processed saxophone, and the tracks always seemed to suggest imaginary landscapes.

Bits of Jim's wide range of musical experiences seep into this project as well..... these include performances with blues legend Albert King, Senegalese griot Mor Thiam, jazz composer George Russell, electronic duo Biomechanique, and the aforementioned experimental jazz group Baker's Brew, in which all performances are spontaneously composed with no prior writing or even discussion. But Jim considers his greatest learning experience in music to be his long standing friendship with Joe Zawinul of Weather Report fame..... many great lessons were learned in Joe's studios in Malibu.

Plans are in the works for live performances of these pieces using a surround sound system with a speaker in each corner of the room, creating an audio collage that the audience resides in during the performance with different events happening all around them.

All compositions are by Jim Goetsch / 2021

Hear all tracks at Bandcamp
with downloads and CDs available there